Day 31 – The Encounters of the Road

Hey everyone, I want to kick off with a big thank you all the heart-warming replies in the last post! It really means a lot, and so awesome and crazy to still have people following months after everything.

31 days… Meaning this had officially marked one month of being on the road.

Looking back, I know that it felt pretty cool to think that I had already reached Ontario by that point. At the same time, there was still a long long road ahead. Even just getting to Toronto.

With yet another full day in the wilderness ahead, it was time to get a decent start to the day. What better way, but to invite my new-found buddy Connor to a mega brunch at the one restaurant in town; the XTR gas station. He accepted my invitation, we packed up, and rode off in style down the block.

The place was actually amazing, with a full on homestyle baking operation in the back. Seriously, some of the freshest and most beautiful looking pies I had ever seen. Not exactly where you’d expect such thing.

We each went all out and ordered our double breakfasts; eggs, hash browns, bacon, toast, french toast, fruit, and yes, pie. 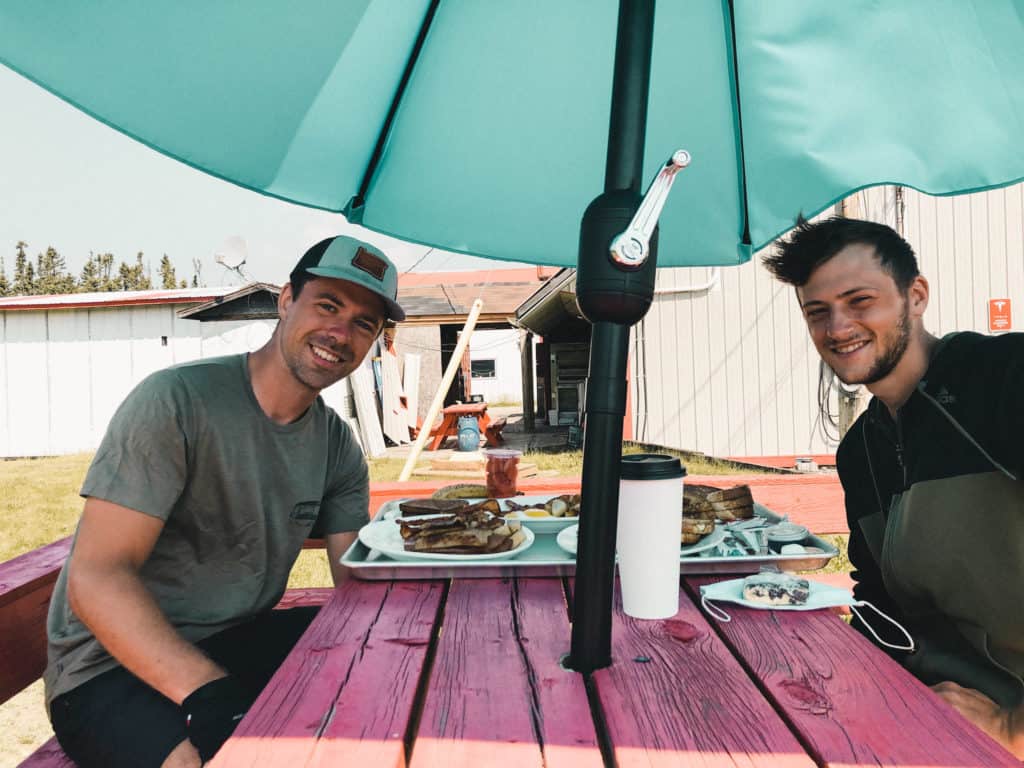 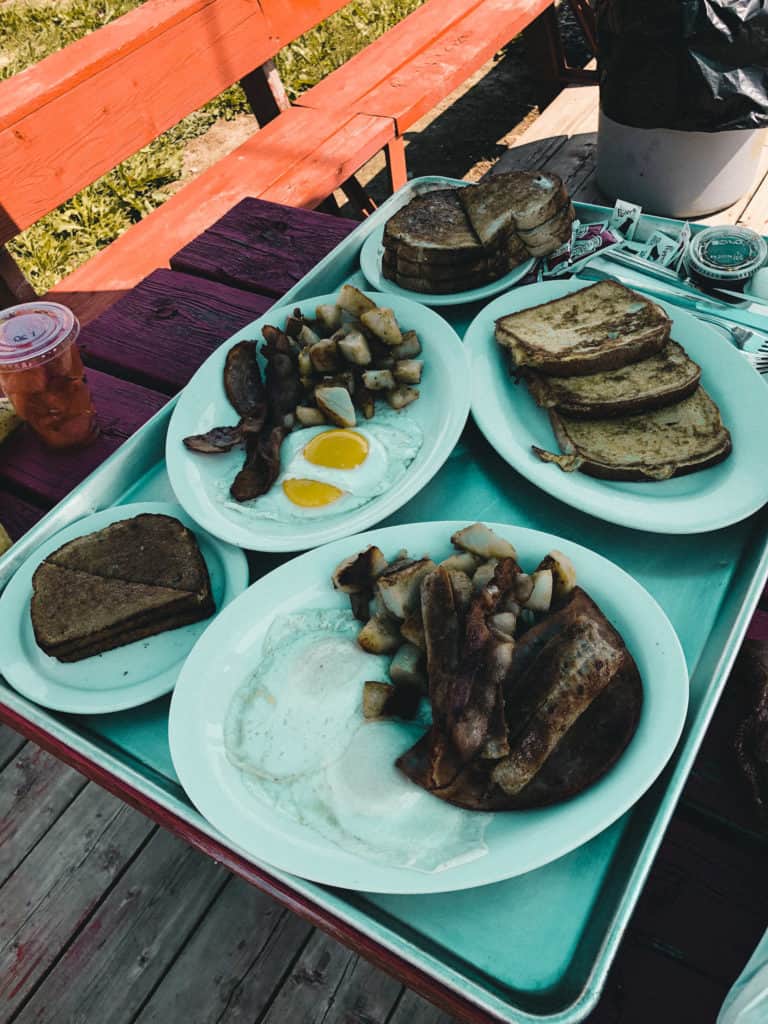 We sat down and exchanged countless stories about how we got to where we were. This guy was a character, and we shared some great laughs. In fact, I don’t even remember the last time I had laughed that hard. Some of his stories were simply unparalleled. My favourite one was the one where he accidentally ended up taking some gravel road for KMs on end, some days North of Toronto.

Connor, if you’re reading this, please feel free to correct me / elaborate on some of the details.

He set up his tent in a patch of forest in the middle of nowhere, and went in only to hear what were clear sounds of a bear roaming the vicinity. He grabbed his bear spray, and stepped out, coming face-to-face with the bear. It was getting a little too close to comfort, so he made the quick decision to use the spray.

To his great misfortune, as he pulled the trigger, the bottle was aimed directly at his own eyes. Spraying himself, and letting out a huge scream of pain and agony in the process, all this with the extreme stress of having a bear right beside him. Well, the scream apparently worked wonders as the ear took off fearing what he surely thought was a deranged psychopath. Nearly completely blinded, Connor went to call 911. As the operator answered, the service completely dropped. What a rough, rough night. I cannot even begin to imagine.

We finished our last bites, stories, and begun getting to work, with Connor attempting fixing his gear issue, and myself taking advantage of the comfy set-up to catch up on the blog.

Connor and I wished each other all the best on our journeys, and parted ways towards our own directions. The theme of this day seemed to be encounters. One of them being when I had a U-Haul truck pull up on the side of the road in front of me. A man stepped out, and as I slowly cruised towards him, I asked him if he needed a hand. He introduced himself, Jesse. 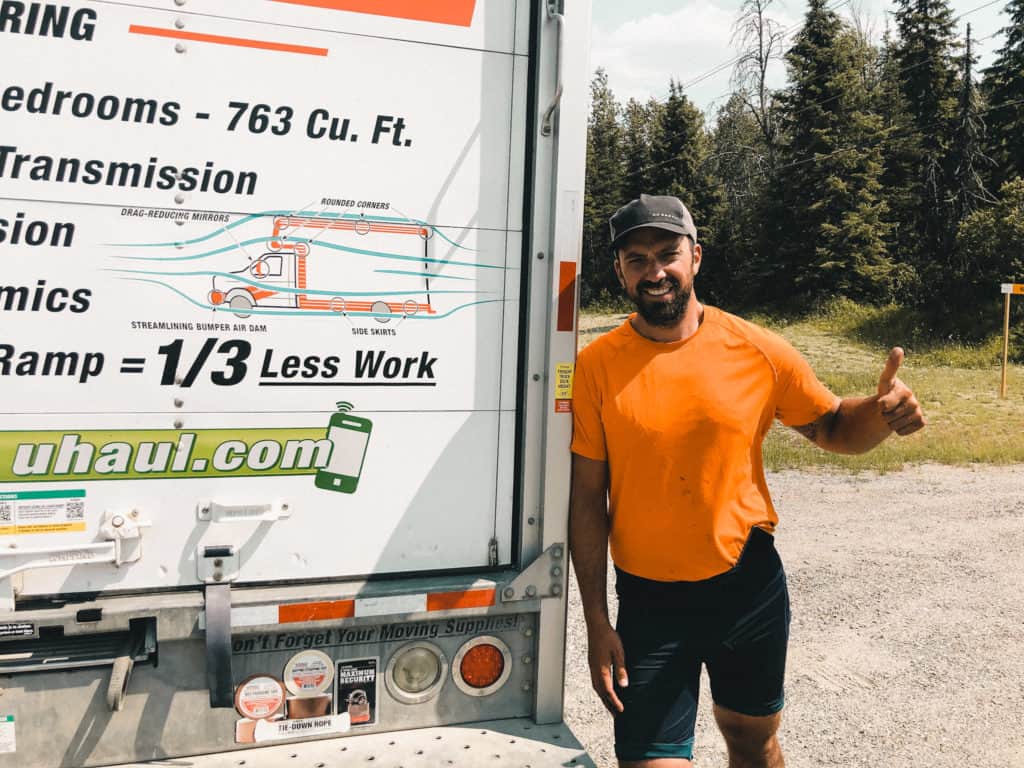 Funnily enough, he was actually a fellow cyclist, ALSO doing a cross-Canada trek, from Vancouver! But what about the U-Haul? It turns out that he had also experienced flat tires on his way to Dryden, all out of spare tubes and stranded with no bike shops for hundreds of KMs in any direction… My nightmare scenario. I right away flashed back to those four spare tubes I had loaded up on at the Canadian Tire. I asked him if he had checked there, and surely enough he had, and they were all sold out!! His wheels fit the same size tube and everything. He was looking at very the guy who just emptied the stock… Me.

I felt so bad.

It’s the name of the game, I suppose. I offered him some of my spare tubes, but a that point, it was already well too late. He had gone through the whole U-Haul truck rental and was heading to the next bike shop, which was way out in Thunder Bay. Instead, he wanted to see if I wanted a ride there. As great as that sounded, I set out to this with the power of my own legs, so respectfully declined the offer, and wished him good luck in his search for new tubes.

Later that day, I came across this mysterious little fellow, in all of his orange-furred glory. 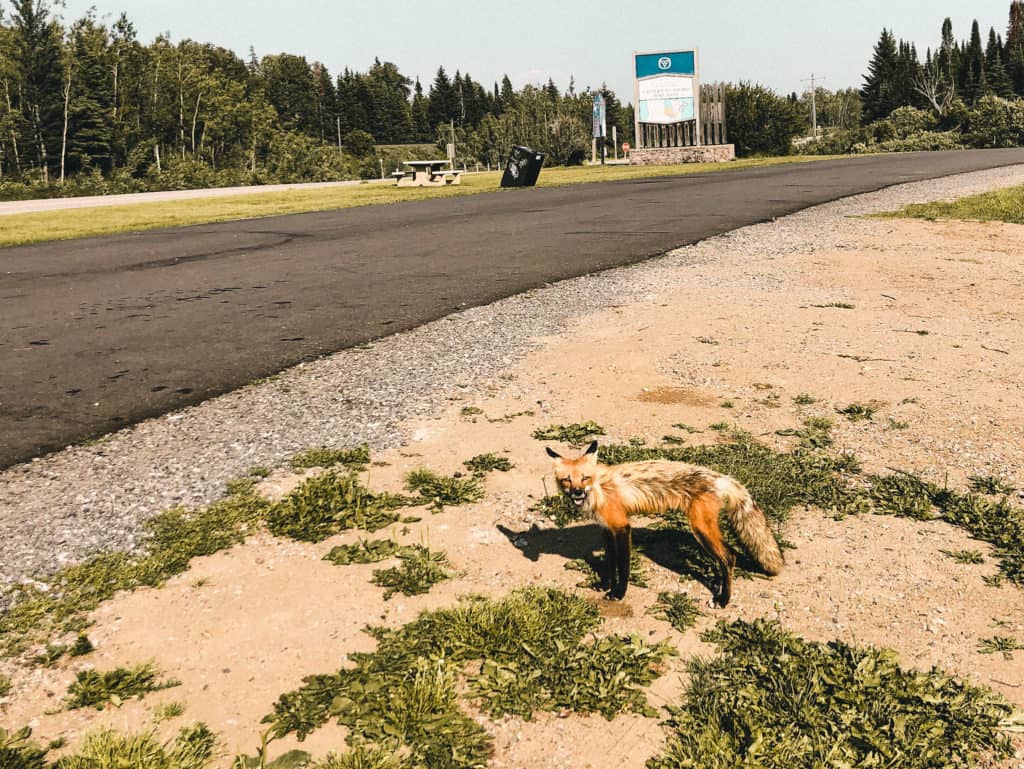 Remember that girl that I had mentioned a few articles back? The one from Vancouver that I had been speaking to daily since Alberta, that I never met in person? Well, this was the day that she asked me if there was any way she could fly over to Toronto to come meet me. I couldn’t believe what I was seeing, but she wasn’t joking. Hearing that she would be willing to do that was an indescribable feeling of happiness. She had been on my mind for weeks on end at that point, and there’s wasn’t much more I wanted than to finally meet her.

We planned for the August long weekend, and I could not wait. If there was anymore needed motivation to get myself to Toronto, there it was.

Not How I Imagined It

The days were getting shorter, and managing time wisely became essential in order to keep moving. Being opportunistic, I stopped at one little isolated motel, where I noticed they had a general store. I went in, picked up the most filling possible assortment of snacks I could find… The shop was closing, and as so, the till was closed. It was cash only. I reached out into my wallet, to see that the only bill in there was the $100 that Carol had so generously given me back in Caronport. I promised her I would do something good with it.

As I froze and relived that entire interaction, hesitating to reach for that bill, the shop owner must’ve thought I was weird hahah.

I had no choice, but to break that symbolic $100 in the most anti-climactic way ever. Carol, I know you’re probably glad I used it on making sure I wasn’t hungry, but this isn’t how I would’ve drawn it up haha. 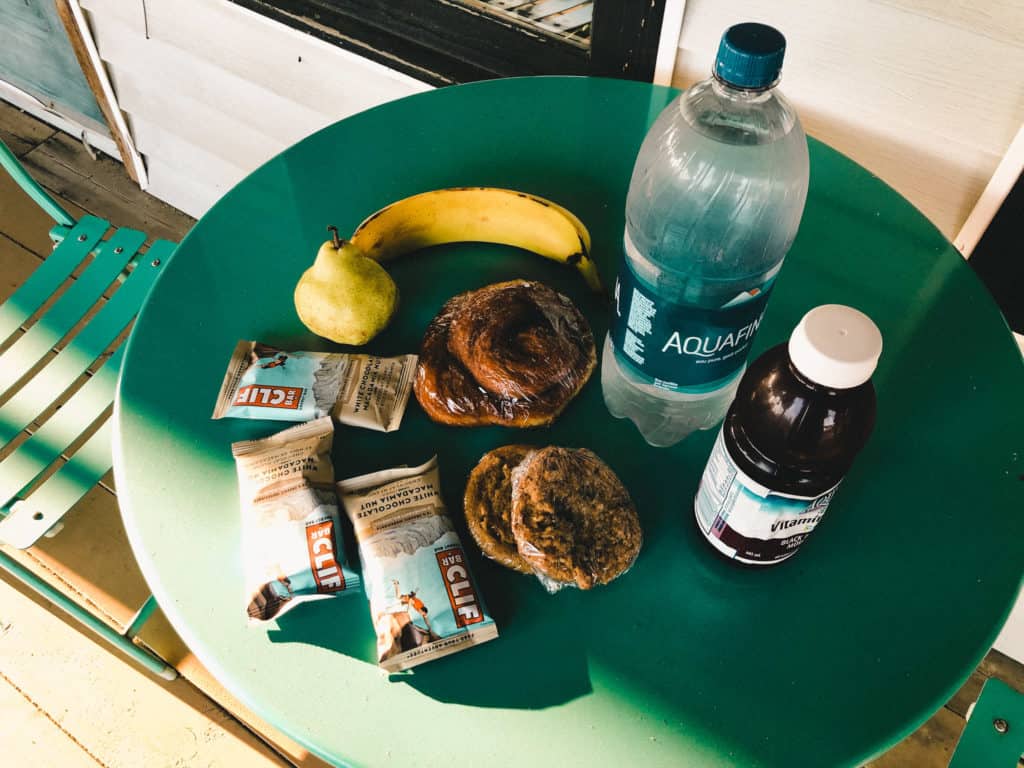 As I crushed my snack feast, a curious man approached me and struck up conversation. While I don’t remember his name, I just recall this being one of the weirder, slightly more unpleasant encounters from this trip. I’m sorry if any Jehovah’s witnesses are reading this, but this was the essence of the conversation, and you can guess how it went.

The sun was already not that far from setting, and I still had some ground to cover. After a few attempts to close off the conversation, I chose to leave abruptly.

The last encounter of that day was a special one. As I gunned it to make the most of the last hour of sunlight, I saw another cyclist from the distance. After basically no cyclists for thousands of KMs, it was pretty surreal to cross three in one day. This one was different. He looked like he was out for a weekend ride. No huge panniers. No gear. Ultralight bike, and traditional cyclist wear, like you’d see on the Tour de France.

I rode up beside him, and we began conversing. He was happy to have company, and so was I. Within the first few sentences, I knew this guy had to be Quebecois. He most certainly was.

In French, he told me about what he was doing, and my jaw probably dropped. He was riding across Canada, from Vancouver to Halifax, attempting to break the record for shortest amount of time to complete it.

Additionally, he was doing so as a way to raise awareness for diabetes, a condition he suffers from. The guy was doing 400-500km PER DAY, with the help of a support vehicle, ensuring he stays healthy and fed. Most days, he was running off of 3 hours of sleep, often woken up in the middle of the night to eat pasta.

He shared deep respect and admiration for what I was doing, a clearly very different kind of experience and trip. An apple to oranges type of comparison. All said, it was so cool to meet him and know there are people like that, really pushing human physical boundaries.

Another One in the Books

Whewf, what an eventful day that was. Exhausted, I was delighted to find a Petro-Can Truck Stop, where I set up my tent, and drifted off to the relaxing sounds of truck engines running. 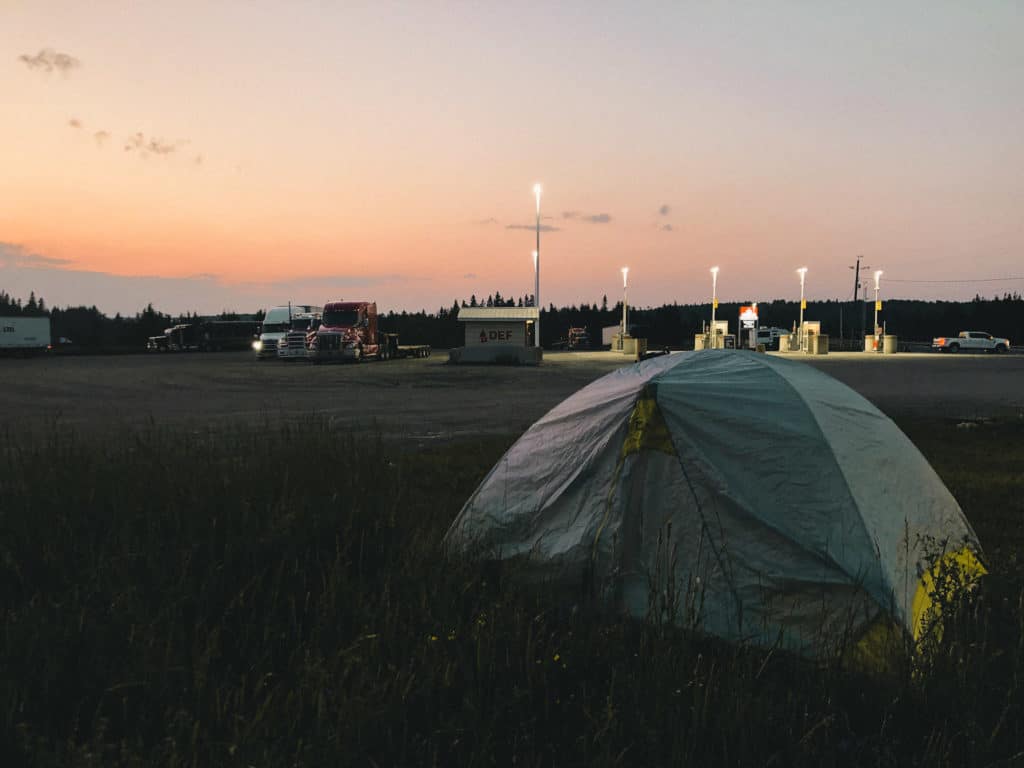 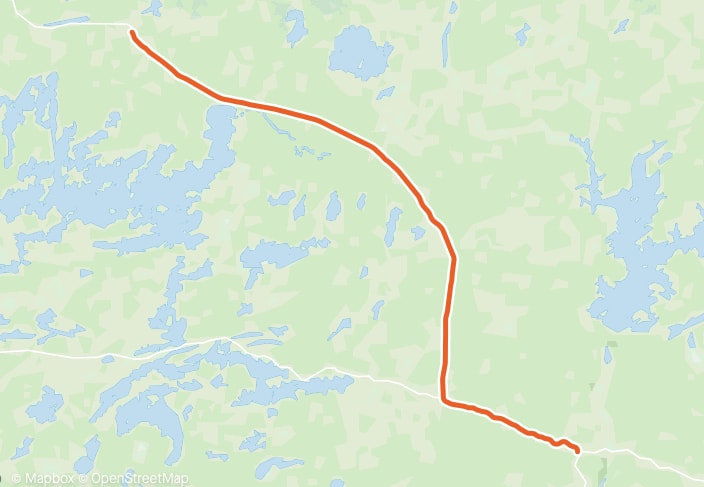 Find me on the map.

Get notified when I post a new blog article!